The Revolutionary Coaster that Started A New Era
After being encouraged to make Magnum my 100th coaster, I went against the advice and just rushed to Millennium Force instead. I wish I would’ve listened to the advice because on my trip to Cedar Point, Magnum stole the show. The hype for the prototypical hyper coaster (coasters over 200 feet tall) was huge. I’d look at on-ride footage and pictures and was always very unimpressed. It just didn’t look like much to me. But this is a great example of a coaster you just have to ride to appreciate. 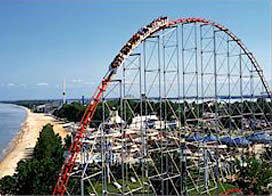 The long, slow lift hill offered a great view of Lake Erie. The first drop is pretty strong considering it’s not that tall by today’s standards. There’s a slight turn at the crest of the next hill. After the second drop into the tunnel the train just becomes possessed and gave a pretty intense ride. The pretzel turn around is fun and the burst of speed when you leave it is pretty surprising.

The trip back to the station is stuffed with ejector air. You almost feel like you’re out of your seat as much as you’re in it even though that’s not the case. While the air time is fun it does approach roughness. In contrast the air on Superman: Ride of Steel at Six Flags New England is forceful, but not as rough. Of course, Magnum is much, much older, but the rough ejector air was still a factor. The station, with it’s outdated futuristic look offered a dash of theming and it seemed pretty lively. I was blessed with two back to back walk-ons of this ride thanks to large storm system sitting over the area. I can finally see why the Magnum has the reputation it does. It’s an older ride, but it makes up

for it’s modest stats with more personality than a lot of the newer thrill rides out there. So it turned out that my 101st coaster was the highlight of my trip to Cedar Point. Final Rating – 9.5 (Excellent-Approaching Superior)

Want to know how amazing a 9.5? Check out my Roller Coaster Rating System.

What’s Your Take?
Have you ridden Magnum XL-200 at Cedar Point? Leave a comment below.