Highlighting the Low Points
Usually my lowest rated coasters and worst experiences involve a painful ride. Sure coasters, especially wooden ones, should throw you around a bit and I don’t consider myself fragile or pain averse. But some rides I’ve experienced were just unforgivably rough or suffered from terrible park 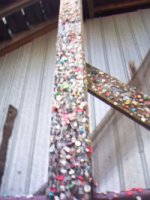 operations and maintenance. Here are the Top 3 Worst Experiences I’ve ever had on a coaster:

Predator at Six Flags Darien Lake
After being greeted by a monument to theme park vandalism in Predator’s queue, I wondered whether Darien Lake cared how their park looked. Nevermind that, I thought, on to the ride. About half way up the lift hill, the train came to a stop. After the break down, I was rewarded with a rough, badly paced ride. Check out my full review.

Exterminator at Kennywood
Exterminator is a dark ride housed in a themed building at Kennywood. The ride was dark which I was excited about, but after a while we just began spinning over and over. All I remember is darkness and spinning with no or breaks, pacing, or the ability to see any theming. When we got out of the ride, we noticed a woman that rode with us that almost fell as she was getting off. It was very disorientating, and not in a good way. We looked like we were walking away from a car crash or something. I’m not sure what the designers were thinking.

Cyclone at Six Flags New England
The chipped white paint and overall aging appearance should’ve tipped me off, but nothing could prepare me for this ride. I got off this monstrosity holding my lower back. I felt more like 62 than 26. From the impersonable teens running the ride to the chipped paint to the single train operation with it’s back seat roped off. Forgive me all you hardcore woodie fans, I don’t know this coaster from its hallowed past as the ‘Riverside Cyclone’. So it gets no points from me for its rep. All I have to judge it by is the rough, painful, trim break heavy trip I took on this demolition candidate.

What was your worst coaster experience? Ever been stuck on a ride? Leave a comment below.