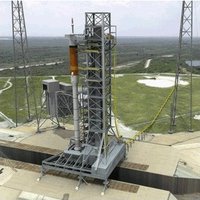 Ares Program Will Use An Interesting Escape System
NASA has announced that it will use a rollercoaster-like escape system for it’s new Ares space program. In the next few years NASA will retire its shuttle program and begin the new Ares rocket program. It will take the best of what NASA has learned from the Apollo and shuttle programs and will take man back to the Moon and eventually to Mars. NASA recently chose a coaster-like escape option for the new launch pads that astronauts will use to reach the final frontier. The Ares rocket will debut in 2010. Coaster-Net.com has the full story.