Voyage’s Triple Down in the Dark

The Voyage’s Triple Down in the Dark | Coaster Moments

After a rapid fire opening featuring hills, airtime, tunnels and a twisted turnaround, The Voyage like Happy Gilmore, has only 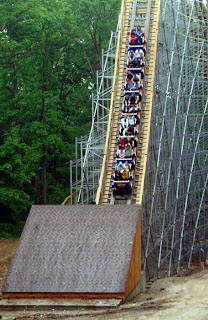 just begun. The train slows considerably at the mid-course brake run and typically after brake runs most roller coasters can’t live up to the intensity of their first halves. That’s not the case with this Gravity Group monster. Immediately after the brakes, just as you let your guard down, you dive into INSANITY.

The train has slowed to a crawl as it creeps back into another tunnel. The dark cool tunnel contrasts greatly with the summer heat and bright sun above ground. Suddenly, the train takes a short dip. Then it drops again down a slightly larger hill. And then the bottom literally drops out from under you in pitch black darkness. The succession of drops are perfectly executed and really take you by surprise. My ride in the second car from the back was the best.

After the insane airtime, the train heads back to surface and completes its circuit with a surprising amount of speed and intensity so late in the ride. If you haven’t made it to Holiday World, go now! It’s a nice park and Voyage is amazing. Read my full review of The Voyage.

Elements like the triple down, put The Voyage in my Top 10 Coasters list as well as the top ten lists of pretty much anyone that’s ridden it. What do you think of The Voyage at Holiday World? Leave a comment below. Photo Credit: Theme Park Review