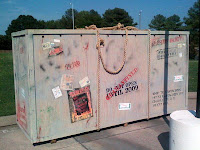 Coaster
ScreamScape has pretty much confirmed the rumors that Carowinds (located near Charlotte, NC) will be getting a relocated Vekoma Boomerang next year. The coaster is shuttle coaster that was formerly Head Spin at Geauga Lake. Now a box has mysteriously appeared at the park’s entrance. Like, Cedar Fair did with Kings Island’s Diamondback, Carowind’s is teasing the new ride with another unknown ‘beast in a box’ teaser. This time its an actual box and not a teaser web page. The box is a crate that been shipped from oversees. It has Asian script and has a sign in English stating: ‘WARNING LIVE REPTILES’.

So let the name game began once again. What’s the name of this new-ish coaster? Python, Cobra, Anaconda. I’m not up on my Asian reptiles. The only one that comes to mind is Godzilla. Leave your guess below. Image courtesy of ScreamScape.