Top 3 Old School Looping Roller Coasters
Most enthusiasts top 10 lists are littered with modern thrill machines boasting the latest technological advances. Many don’t even have a single roller coaster from the last millennium. There’s nothing wrong with that, it’s just important to recognize that there are some gems out there that don’t hold any current world records.

This week I’m counting down the top 3 roller coasters that pre-date me. I’m also ashamed to admit that I skipped Space Mountain at Walt Disney World. I was too scared and was far from the roller coaster connoisseur that I am today. I was 8. Here’s my list in order of old-schoolness: 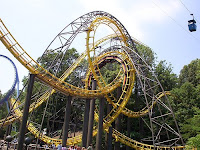 Busch Gardens Europe’s Loch Ness Monster turned 30 this year. Even at its advanced age it still wows thousands every year. Using the Virginia park’s natural terrain, Nessie features a steep 11-story drop to the Rhine River and the world’s first (and currently only) set of interlocking loops. You really have to give Busch and Arrow credit. Back in ’78 most looping coasters were mild loop and corkscrew coasters. Park goers were excited just to be turned upside down, so not much attention was payed to the layouts of these early steel loopers. Nessie also boasts an extra long downward helix in complete darkness. I gave it an 8 out 10. Read my full Loch Ness Monster review.

Mind Bender is one of the acclaimed Anton Schwarzkopf’s most popular creations. Like all of the Schwarzkopf loopers, Mind Bender uses a lapbar restraint system instead of the more common over the shoulder restraints. Its terrain layout features two vertical loops, an overbanked turn, a tunnel and a helix. It’s a fun and still surprisingly forceful ride that still has trains returning to the station with happy riders.

Demon completely caught me by surprise on my visit to Great America. It opened in 1976 as Turn of the Century. It was one of the first roller coasters to feature two corkscrews. Then in 1980, it was remodeled to include two more loops. Aside from the new, wildly popular vertical loops, the ride was re-themed with a new name, rock formations, tunnels, and a water fall of red blood.

The second tunnel had (at the time) a sophisticated lighting system.The lights are so disco-esque and 70’s that it’s not even funny. I’m so glad that Great America hasn’t updated this ride. It was such a surprise and so much of a fun and fairly smooth ride that it nearly overshadowed the park’s signature coaster, Raging Bull. Don’t miss the equally corny and dated ‘Demon’ theme song that plays in the queue.

Check out my new favorite YouTube video. It’s a commercial advertising the newly remodeled Demon at Great America for the 1980 season. Note that it was called Marriot’s Great America, in the pre-Six Flags days.

What’s your favorite old school looper or any coaster? Leave a comment below. Image 2 courtesy of JoyRides. Image 3 courtesy of CoasterImage.