What is a Stand-Up Roller Coaster?

What is a Stand-Up Roller Coaster? 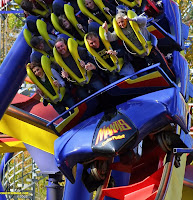 Stand-up roller coasters are steel roller coasters designed so that the riders stand during the course of the ride. Riders straddle a bicycle-like seat that adjusts for the riders height and are restrained by over-the-shoulder restraints. They are very similar to seated looping coasters and some roller coasters designed for sit-down trains have also added stand-up trains. The first coaster designed specifically for stand-up trains was King Cobra at Kings Island. It operated from 1984 to 2001. Like their seated counterparts, stand-up coasters typically offer loops.

Stand-Ups: A Dying Breed
Today, stand-ups are a dying breed. There are currently 15 in operation. There are 2 Intamin, 6 Togo, and 7 Bolliger & Mabillard stand-ups in operation around the world. Darien Lake has Six Flags Astroworld’s Batman the Escape in storage. On my recent visit to Darien Lake, I asked park officials and they said the park has no plans for the coaster for now. The last new stand-up coaster was Georgia Scorcher which was built in 1999 at Six Flags Over Georgia. Riddler’s Revenge is the current “King of the Stand-Ups” (for whatever it’s worth) at 156 feet tall and over 4,300 feet long. It boasts six inversions including: a vertical loop, dive loop, dive loop, inclined loop, & 2 corkscrews.

In my opinion, stand-up coasters don’t really add much to the looping coaster format. In fact, some stand-ups are not just rough from the loops, but have also given me an uncomfortable pressure in my lower legs. Mantis at Cedar Point was a big letdown. Check out my review here. And Shockwave at Kings Dominion is bad for a number of reasons. On the other end of the spectrum, I loved Chang at Six Flags Kentucky Kingdom and Riddler’s Revenge at Six Flags Magic Mountain was about equally as good. 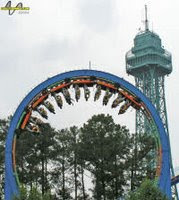 Last year, there was a death when Fujin Raijin II at Expoland in Japan derailed. According to RCDB, the accident gained national attention and the Japanese government required safety inspections. As a result many parks closed down their coasters when they could not afford the inspections. Read more about this accident. And in 1999 there was death on Shockwave at Kings Dominion. A 20 year-old man freed himself of the restraints and suffered fatal head trauma when he was thrown from the ride into a steel catwalk near the ride’s final turn.