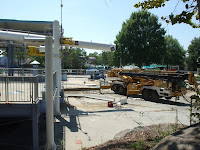 My roving reporter Judy has sent in some photos of the ride’s construction. As I reported, the relocated Geauga Lake shuttle coaster will be placed where the Flying Super Saturator is now. The park is already taking down the Super Saturator as you can see from these photos. Judy said that its pieces are being piled up outside the park, so there’s a good chance that Carowinds is looking to sell this ride to another park. 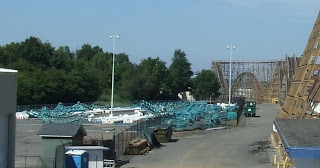 Headspin’s track can be seen in a lot to the left of Thunder Road. There’s still no official word from the park, but the latest rumors are that the ride will be re-named Carolina Cobra. It’s not a terrible name and it goes with the other coasters, the Carolina Goldrusher (fun mine train) and the Carolina Cyclone (surprisingly smooth Arrow looper).

Boomerang coasters are a dime a dozen don’t really bring anything new to a park that already has a number of looping coasters. My only hope is that Carowinds will use these new lapbar trains. That would add a new dimension and they wouldn’t suffer from the headbang that most Vekomas do. In my mind, it’s the only way to make this a more exciting addition. Well, I can dream at least.

A Fair Trade?
Headspin was a Vekoma Boomerang with cobra roll (two loops) and a vertical loop. Riders traverse the ride’s short course forwards and then backwards. Super Saturator is a steel suspended coaster where guests could use water canons mounted near the ride to shoot water at the riders overhead.Do Carowinds fans think this is a fair trade? Leave a comment below.