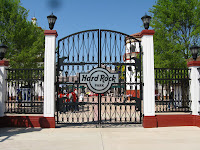 Hard Rock Park Closes Early, Files Bankruptcy
In its first season of operation, Hard Rock Park has closed its doors with hopes to reopen in 2009. As the saying goes, the writing has been on the wall. Word that the park was not hitting the attendance numbers it had hoped for having been swirling around the ‘Net for months.

Many in the theme park community point to the $50 ticket price as the main reason for the park’s downfall. While I’m sure it didn’t help matters, I think the troubled economy was the x-factor that the owners could not have foreseen in the seven years leading up to this year’s opening. After visiting the park during its media day last May, I know how much time and money they put into the park. Hopefully, they can figure out a way to reopen the park and recoup some money in 2009.

What do you think of the park’s closing? Leave a comment below.