Superman Ride of Steel to be Enhanced for 2009

Will the Best Coaster on the Planet Still Be the Best?

When I first saw the news that Six Flags was going to add new enhancements to their masterpiece, Superman – Ride of Steel at Six Flags New England, I was cautiously pessimistic at best. I’m generally a very positive, easy-going guy, but I’m a bit concerned that Six Flags is messing with the best roller coaster on the planet. Since it’s debut in 2000, Superman has won 4 Golden Ticket Awards and its placed at the top of Mitch’s Internet Poll several times. It’s worth noting that Six Flags re-uses the Superman name on many of their roller coasters, but New England’s Superman is a completely unique and awe-inspiring ride.

According to the press release:
“Going above and beyond traditional steel coasters, this state-of-the-art invention will undergo a revolutionary makeover. The adventure will send riders up 20 stories while flying through fog banks, fire bursts and heart-pumping audio for three minutes and twenty two seconds of extreme thrills.” 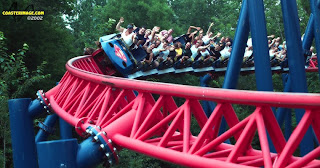 I’m fine with the enhancements above, but the transformation will also include newly renovated trains. The trains are my biggest concern. Today, Superman offers an amazing, air-time packed ride. Although, I’ve heard that recently the ride is starting to show some age. I caught some flack for my negativity in a few message boards, but I’m just nervous and feel that it’s not a forgone conclusion that these enhancements won’t hurt the ride. I’m slowly being talked down from the ledge. Hopefully, I’m over-reacting and Superman will be as good as ever.

What do you think about these enhancements? Do you think Superman will turn out better, worse, or the same. Images courtesy of CoasterImage.