It was getting late and I figured if I was going to squeeze in Knott’s it was time to head to X2 (4:40) and face my long wait fate. Luckily, the wait was drastically reduced. Instead of over 2 hours it was only about 50 minutes. Halfway through my wait in the extreme-themed queue I realized I had lost my cell phone. I hoped that I’d find it later and stayed in line. X2 was quite an experience. The woman next to me said she saw her life pass before her eyes on the first drop and she was dead serious when she said it. She looked like someone had just robbed her at gun point as we pulled into the station. Read my full X2 review.

For the next 2 hours I searched for my phone, visited guest relations to file a report, bought some souvenirs, and rode Deja Vu, Batman, & Tatsu one more time. I never did find my phone, but I tried to make the best of my time and ride as much as I could before heading to Knott’s. Ninja’s line was too long, I knew I’d probably regret Viper having ridden Great Adventure’s Scream Machine (read review) and countless other aging Arrow loopers. Plus, I figured I’d already given Superman 25 minutes of my precious time. I knew I could get right on Tatsu with the pass and I was glad that I did. I enjoyed it much more the second time with a more secure fastening of the restraints. 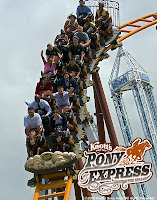 By the time I arrived at Knott’s Berry Farm it was 8:30. Parking was a bit confusing, but I found a lot and dragged my tired body to the guest relations window to pick up my media priced ticket. It was only a little cheaper than the twilight rate, but every dollar counts, right? I dashed into the park as best I could. My calves started locking up from all the speed walking and poor hydration. I heard ‘sorry for the inconvenience‘ being announced as I walked near Ghostrider, so I turned around and headed for Pony Express. After about a 10 or 15 minute wait, I rode it. It was kind of a long wait for a short ride, but it was new for this year, plus it was cool seeing how it matched up to Darien Lake’s MotoCoaster.

I moved across the back of the park toward Xcelerator. I hadn’t seen a train running on it and started to get worried. Just as I entered the queue a train stormed by. Two or three trains later, I was enjoying a 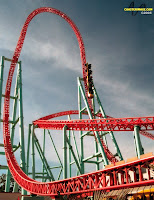 short, but thrilling ride. The starry and quiet experience towards the top of the top hat hill was awesome! I would’ve loved a re-ride, but there was no time. I worked my way over to Silver Bullet. It was a walk on for the front seat. After that I got turned around trying to get to Montezuma. It was 9:50-ish by now and I was jogging. As I had heard, Montezuma was fun. I’m glad that I had heard good things about it, otherwise I might’ve overlooked it.
I exited Montezuma at 9:56 and I tried to decide whether I should just re-ride someting nearby, call it a night, or make a run for Ghostrider. I figured it wasn’t likely I’d make it, but I might as well try to find my way over there before they closed down the line. I ended up being the last rider they let in the queue. So, somehow I jammed five coasters into about an hour and a half. I left the park at about 10:15. Surprisingly, Ghostrider’s station was easily the busiest at the park. Exhausted, I found my rental car and headed back to LAX for my 12:30 AM red eye flight back East.