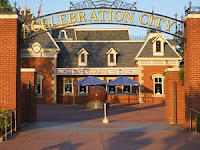 Herschend also operates Dollywood which just canceled its 2009 attraction. The owners are exploring new ideas for the land that the park is on including an aquarium, re-theming the park, other family attractions, retail, and dinning.

The park was home to the Ozark Wildcat a GCI twister wooden coaster. There was also a S&MC Hurricane called Thunderbolt and a Miller family coaster called Jack Rabbit. No word yet on where these or the other rides from the park will end up.

What’s Your Take?
What do you think of this news? Will you miss Celebration City? Leave a comment below.