Recent Theme Park News Stories – Transformers, Terminator, & More
Since I’ve been busy working on Coaster Portal, I’ve missed a few news stories. Here’s a recap of the biggest stories from the past month or so:

Gravity Group Launches Blog & Podcast – Gravitycast
The Gravity Group, acclaimed wooden roller coaster designers, recently launched their blog and podcast known as Gravitycast. If you’re not familiar with their coasters check out my reviews of The Voyage, Hades, and Ravine Flyer II. They’re all amazing and all three are in my Top Ten. Gravitycast looks to be more than just a place for the designers to post updates (which would be enough for coaster geeks out there like myself), they’ve essentially opened up a conversation with the fans. Read more at: Coaster Portal

The LA Times Funland Blog has information on the new GCI Terminator wooden coaster coming to Six Flags Magic Mountain in 2009. Six Flags is expected to make an official announcement later this week. I still think it’s a little odd that a Terminator-themed coaster wouldn’t be a steel coaster, but Six Flags is likely looking for that fun, family friendly ride that will have wider appeal. Plus, Magic Mountain could use another woodie as they only have the old racing coaster, Colossus. Read more at the LA Times Funland Blog.

Universal Announces Transformers Ride for 2011
Also on the LA Times Funland Blog, are a few details confirming the rumored Transformers ride. Universal will build a dark ride that sounds similar to the Spider-Man ride at Islands of Adventure and Curse of Darkastle at Busch Gardens Europe. Read more about those rides on my Top 3 Dark Rides post. One major difference with the Transformers ride will be that this ride will built many years lafter those rides and will benefit from enhancement in high definition 3D technology. Not only that, but it will feature two-story tall robots going at it all around you. Universal will build the ride at the Universal Hollywood park as well as the Universal Singapore park. Sorry East Coasters. Read more at The LA Times Funland Blog. 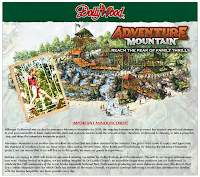 We may have one of the first 2009 projects to fall victim to the struggling economy. Recently, Dollywood had to unannounce their 2009 attraction known as Adventure Mountain. They sight the economic downturn as the reason for putting the ride on hold. I give them credit for coming out with a statement rather than just sweeping the project under the rug. Read the full announcement.

What do you think of this news? Leave a comment below.