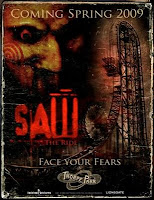 Thorpe Park Announces Saw: The Ride for 2009
Thorpe Park recently announced the name and theme of its 2009 Gerstlauer Eurofighter. It will be themed after the popular horror movie series, Saw. The ride will feature a 100′ climb and a beyond vertical drop of 100 degrees. Saw may be in the same vein as Dollywood’s Mystery Mine which was also a custom Eurofighter.

I didn’t know that the Saw series was so popular in the UK, but apparently it is. If you’re a fan of the movies, the you’ll really appreciate the site.

**Warning this site is not appropriate for children.** Check out the official web site for Saw: The Ride. 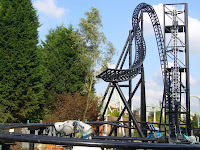 As you can see from the photos above, the ride’s already pretty far along and should easily make its Spring 2009 target opening date. Any British coaster enthusiasts excited about Saw? Leave a comment below. Images courtesy of Thorpe Park.