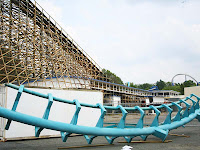 Carowind’s relocated boomerang coaster, Carolina Cobra is coming along nicely. The park’s mini site for the new attraction has tons of photos and even a live web cam, likely perched from the park’s observation tower. As Carowinds is my home park I’m looking forward to reporting on whether or not the coaster’s new trains will improve the ride. Check out the official Carolina Cobra site for more.

ndback is Going Up
One of the most anticipated roller coasters opening in 2009 is the new B&M hyper coaster being built at Kings Island. Diamondback’s site also has a web cam, a huge photo gallery, as well as some goodies to download. Hopefully, they’re sparing as many trees as they can. Part of the ride’s appeal will be its trip into the wilderness behind the park like its legendary neighbor Beast. See the Diamondback site for more. Also, head over NewPlusNotes and enter a contest to ride it on opening day. 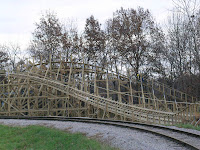 Prowler – Worlds of Fun’s Woodie is Taking Shape
After a lot of land clearing, Prowler is starting to go vertical. Prowler will kick off with an 85-foot drop into a ravine. The rest of the ride will closely hug the terrain as it reaches speeds in excess of 50 mph. For more, check out Worlds of Fun’s Prowler site.

Ground Prep for Magic Mountain’s Terminator Coaster
While it doesn’t looked to have gone vertical yet, WestCoaster.net has some photos of the construction site for the new Terminator coaster that’s coming to Magic Mountain. The GCI woodie will be 100′ feet tall (10 stories), over 2,800 feet long, and reach speeds of 55 mph. Californians will enjoy quite an upgrade as its replacing the horrible, worst-rated, Pysclone that was demolished in 2007. The funny thing is that on my recent trip to Magic Mountain, as I rode Deja Vu, I didn’t realize I was near the former site of Pysclone much less the site of a new coaster for ’09. See WestCoaster.net’s photos.

Stay tuned for more construction updates on coasters like Hollywood Rip Ride Rockit, Manta, Ring°Racer and more. Which of these 2009 coasters are you most excited about? Leave a comment below.