I’m going to ‘go out on a limb’ and unofficially announce Six Flags New England’s newest roller coaster: Lex Luthor. From the hints being dropped on the viral marketing site, Clawshun Industries, and the ride’s new purple paint job it’s pretty obvious that Superman Ride of Steel will be re-themed as a Lex Luthor coaster. The purple paint job had me scratching my head until I saw the viral marketing site Six Flags created to promote Sup’s redesign. Clawshun Industries is the fictional company whose web site has been hinting at ties to none other than the shady and corrupt LexCorp.

If you visit the message from the president page you scrub away the president’s hair to reveal his bald Luthor-like head. Also, when you scroll over certain text there are other references to Superman’s maniacal foe. Thanks to my comic geeky brother for reminding me

of Lex’s war suit that’s purple and green (pictured above). So should we expect the track supports to be painted green too? We’ll see.I’ve been pretty critical of the Superman Ride of Steel renovations, fearing that Six Flags is messing with perfection. But if the ride’s getting a new name and theme at least that’s a positive. It’s annoying to have to preface any praise for the ride with, “The S:ROS in New England.” Since it’s the best ride on the planet it should definitely have its own identity. So far, I’m liking the creativity. It will be neat to see what kind of story they tell with the theming and all of the new special effects. Read more about the Superman Transformation. Also, check out my full review of Superman @ Six Flags New England. 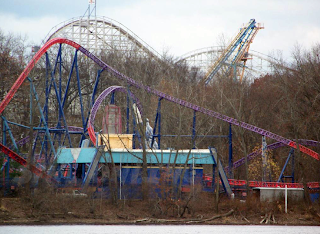 UPDATE – I was wrong about the Lex Luthor theme. Superman Ride of Steel is now Bizarro>>>

What do you think of the re-theming of Superman: Ride of Steel? Do you like the idea of a Lex Luthor coaster? Leave a comment below. Image courtesy of SFNEOnline.com.