Roller Coaster For Sale: Still No Buyers for the Big Dipper

Big Dipper is the sole survivor of the now defunct Geauga Lake Amusement Park in North Eastern Ohio. In 2007, Cedar Fair closed the amusement park while keeping the adjacent water park, Wildwater Kingdom, open. Several of the park’s largest roller coasters found new homes and others were scrapped. Thunderhawk migrated to Michigan’s Adventure, Head Spin transformed into Carolina Cobra at Carowinds, Steel Venom became Possessed at Dorney Park, Dominator traveled to Kings Dominion, and X-Flight flew to Kings Island to be Firehawk. Surprisingly Big Dipper, which has been designated an American Coaster Enthusiasts Landmark, has been abandoned. I had heard that the ride was sold at an auction to an undisclosed party, but according to Max Ivey’s website Midway Marketplace, it’s up for sale again.

Why is Big Dipper Still Up For Sale?
At a shockingly low price of $65,000 one has to scratch their head as to why there are still no takers for this 1925 John Miller 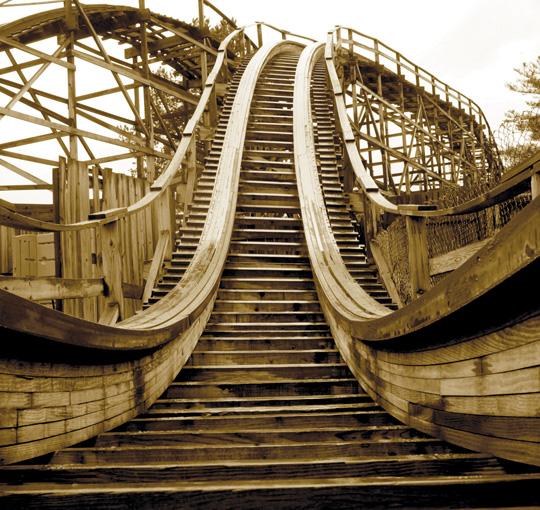 designed roller coaster. It’s especially puzzling when you consider that Six Flags Great America is moving a classic woodie from another park in the Little Dipper. So, it’s not like the idea of moving a classic wooden coaster is unpopular these days. Here’s more about the ride from a listing on Midway Marketplace:

Built in 1925 this is a rare combination of business opportunity and historical restoration. Its one of the seven oldest coasters still in existence on Earth, and in the right location it will still thrill audiences and fill pockets. this grand wooden roller coaster is complete and still standing on what used to be the Geauga Lake Amusement park.   -Midway Marketplace

So why are there no takers? It could be that amusement parks don’t want to pay the steep cost of moving the ride. As the names suggest, Big Dipper is nearly 4 times longer than the Little Dipper.  Ivey has more on the Big Dipper on his blog. Read his full post about the Big Dipper.

Potential Homes for the Big Dipper
The first home that comes to mind is the Roller Coaster Museum in Texas. Although, to my knowledge they haven’t expressed an interest in having full operating roller coasters on site. Central PA park Knoebels has a track record of saving and resurrecting classic wooden roller coasters. It’s already a favorite park among enthusiasts. Saving a historic ride like this would further cement that park as a haven for hard core coaster fans. Knoebels is busy with Flying Turns at the moment and the relocated indoor coaster Black Diamond for 2011, but they could buy the Big Dipper and store it until they’re ready to build it.

Shop for an Amusement Park Ride

Want to be the talk of your neighborhood? Maybe in a good way or bad way? Are you in the market for amusement park rides? Check out the Midway Marketplace’s listings.

What’s Your Take?
Why do you think the Big Dipper has yet to find a new home? Where would you like to see it pop up? Leave a comment below. Images courtesy of Midway Marketplace.