Located in the Carolina Boardwalk area, Carolina Goldrusher is a steel mine train roller coaster that debuted during the park’s opening year in 1973. As you’d find on any mine train coaster, it features locomotive-themed trains that ride steel rails on a wooden support structure. It’s a family-friendly coaster that has no loops, relatively low speeds, and modest heights.

Gold Minin’ in the Carolinas

Goldrusher is located in a small partially-wooded patch of land in the middle of Carowinds. The entrance is in the Carolina Boardwalk section near Flying Cobras. The trees add to the appeal of the ride and they help hide the twisted steel of Nighthawk and Vortex that loom nearby.

Goldrusher’s old wooden station with its mining company sign are nice cues of the ride to come. The station and theme also point to the Charlotte area’s real gold mining past. Believe it or not, the first documented discovery of gold in the United States happened in the area (see Reed Gold Mine).

Inside, you find two locomotive-themed trains from a bygone era. After boarding, ride operators lock down the restraints for each car’s riders manually and all at once. The seats might be a bit of a tight squeeze for adults and those with longer legs. I’m 5’10” and I have to criss-cross my legs at the ankles to fit most comfortably. I’ve seen people of all shapes and sizes ride. So, it shouldn’t be a real issue, just something to be aware of. 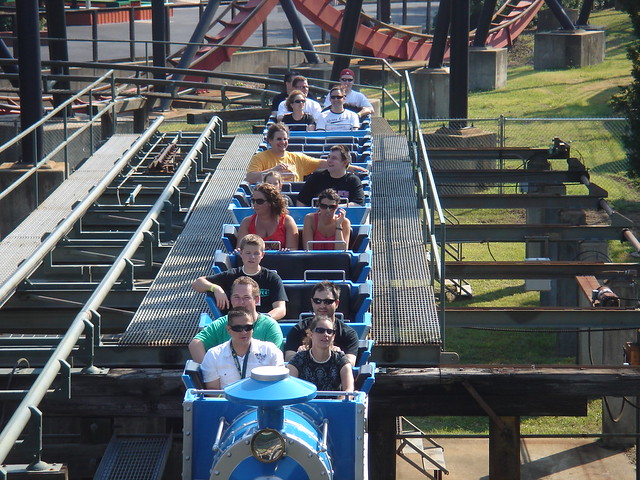 Once the train is dispatched from the station, you coast around a few turns and towards the lift hill. After the relatively short trip up, the train makes a small, swooping drop to right and begins picking up some speed. Next, the train travels along the ground, gradually picking up some more speed. Things get a bit more thrilling as it speeds into a partially-covered underground section that looks a bit like a mind shaft. Down here, the train performs an upward helix, winding its way upward around a circular section of track. As the wooden beams whiz by overhead, the ride’s speed feels even faster than it is. The helix certainly isn’t buttery smooth, but as you’re tossed around a bit, it definitely feels more fun than painful.

At the top, now above the underground helix, the track straightens and the train creeps towards the second lift hill. There’s another dip at the top, but this time instead of a swooping turn, the train is dropped into a downward helix. This large, banked circle produces the feeling of going “down a drain”. The speed and g-forces are the most intense in this section, but still nothing that should deter riders.

The ride finishes by navigating up a small hill and then dropping into a fully enclosed, dark tunnel. It’s brief, but a very effective surprise. As you climb out of it, the train does some strange banking that jostle riders around a bit. It’s quite the wild finale, but still on the level of a survivable family ride. Best of all, the tunnel comes out of nowhere and can’t be seen from the park’s pathways or from the ride until it gobbles you up.

Immediately after the tunnel, the train hits the station brakes. While you wait for the other train to depart, it’s always fun to see riders of all ages discussing their adventure now that it’s over. 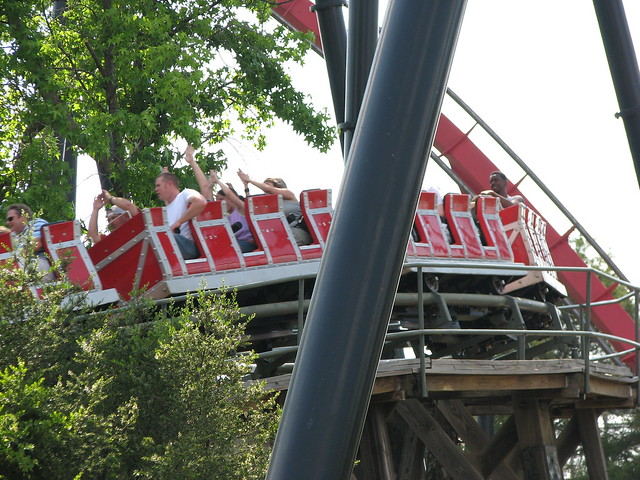 Great for Beginners, Families, & Even Enthusiasts

Goldrusher is a perfect roller coaster for kids that have conquered the kiddie coasters (like Lucy’s Crabby Cabbie and Woodstock) and are ready to step up to a “big coaster”. Goldrusher may have higher speeds than Woodstock Express, but it does very little actual dropping, so I feel that the intensity is pretty manageable. It has more swooping turns that descend versus the straight ups-and-downs of Woodstock. Beginners might even prefer it over Woodstock if they’re really not a fan of drops.

The end is a bit wild, but the younger kids I know have braved it and asked for re-rides immediately. Goldrusher is the first roller coaster that my entire family rode together which includes me, my wife, my coaster-loving 10-year old, and my less adventurous 7-year old. And we all had a good time.

And I feel enthusiasts can appreciate the two helices, tunnel, and overall solid mine train theming and feel. As a mine train coaster fan, I’d say Carolina Goldrusher is among the best of this type of coaster. Also, as I just stated, it fills an important role in the park’s ride lineup as an excellent stepping stone to bigger rides.

My Take on Carolina Goldrusher

With modest dimensions, but a relatively lengthy and satisfying ride, Carolina Goldrusher is a crowd-pleaser for a wide range of guests. Carowinds’ first roller coaster is still a strong part of the park’s ride lineup and a must-ride families, younger riders, and beginners who are ready for a challenge.

Have you ridden Carolina Goldrusher? What’d you think? Leave a comment below.