What is a Hyper Coaster? 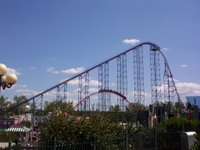 Back in 1989, Cedar Point opened Magnum XL-200. It was the tallest coaster in the world at 205′. More important than setting a new height record, it started a whole new trend in coaster design. Up to that point steel coasters were solely looping coasters. The one-upmanship between parks was to build the coaster with the most loops. Magnum had no loops, just enormous hills and drops that offered surprising pops of airtime at the crests.

The popularity of Magnum XL-200 kicked off a revolution in the theme park industry. What was known as the ‘Coaster Arms Race’ began as parks aimed to build the tallest coaster in the world in this similar style to Magnum’s. The term hyper coaster was coined to refer to roller coasters 200 feet or taller. Last month, I listed my Top 3 Hyper Coasters.

Giga Coasters and Strata Coasters
Later, the term giga coaster was used to describe coasters 300 feet or taller, though these are rare. Millennium Force at Cedar Point is an example of a giga coaster. And in the past couple years, the term strata coaster has been applied to roller coasters 400 feet or taller. Currently, Top Thrill Dragster at Cedar Point and Kingda Ka at Six Flags Great Adventure are the only strata coasters. They’re both built by Intamin.