The Best to Come Out of the Hyper Coaster Era

The popularity of Magnum XL-200, which opened it 1989, kicked off a revolution in the theme park industry. What was known as the ‘Coaster Arms Race’ began as parks aimed to build the tallest coaster in the world in this similar style to Magnum’s.

#3 Magnum XL-200 at Cedar Point
The Old Geezer’s Still Gettin‘ It Done…
It’s the one that started it all, but I didn’t believe the hype. Could the first of its kind really still be that good? Yes! Magnum still boasts a great ride and an intangible. It has a lot more personality than it’s much taller, high-tech neighbor, Millennium Force. The first half is beautiful, with a stunning view of Lake Erie and some awe-inspiring airtime. Check out my full review.

Great Train Design On One the Smoothest Coasters You’ll Find…
Standing at 170′ it is not as tall and may not look as intimidating as some of the other hyper coasters around. But that 210′ drop into the ravine is quite an experience. An experience Fabio would like to forget. (In 1999, a goose struck the model in the face while riding Apollo on press day.) Today, you won’t find and geese, but you will find the smoothest ride, the most comfortable and unrestricting chair-like seats on one of the best hyper coasters around. Check out my full Apollo’s Chariot review. 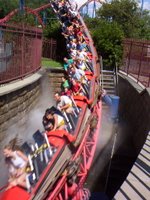 The Very Best of the 132 Coasters I’ve Ridden. So, it ain’t bad…
Six Flags likes to reuse their DC Comic character names when they name rides. There are at least a dozen coasters bearing the name Superman and three dubbed “Ride of Steel”. If you haven’t ridden the Six Flags New England installment then you haven’t experienced, in my humble opinion, the best coaster on the planet. It looks like the coaster enthusiasts community agrees. S:RoS took top honors at this year’s Golden Ticket Awards. Check out my full Superman: Ride of Steel review.

What do you think of my top hyper coasters? What would your top three be? Leave a comment below.