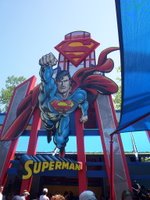 Superman: Ride of Steel Reclaims Title
as Top Steel Coaster in the World
I have to admit that I was glad to see Superman: Ride of Steel take the top spot at this year’s Golden Ticket Awards. Out of the 130 or so roller coasters that I’ve ridden it’s the best! Don’t confuse this Superman coaster with the two clones by the same name at Six Flags Darien Lake and Six Flags America. The S:ROS at Six Flags New England is the complete package. It starts with a 200-foot climb unnervingly close to the Connecticut River. Then you’re treated to a breath-taking 220-foot drop into an underground tunnel.The rest of the ride is non-stop airtime on pretty much every hill.

Millennium Force is a great coaster, but I feel it’s overrated. It’s one of the tallest coasters around and as a result, it’s also one of the fastest. It also happens to be at a really popular park, Cedar Point. I think all of these factors add to the hype. But in my opinion, there are many coasters that deliver more thrills, excitement, and overall fun.

Coaster Designer Showdown
As I looked at the top ten steel coasters, I couldn’t help but notice that there were four coasters designed by my favorite designers, Bolliger & Mabillard. B&M practically owned the 90’s. They introduced the first inverted coasters with the Batman clones and made more enjoyable steel loopers than longtime leaders Arrow Dynamics. This side of the millennium, Intamin has emerged with more marquee coasters. Intamin boasts not only the four critically acclaimed coasters on the list below, but also six of the seven tallest coasters in the world. From the 26-story tall Thunder Dolphin in Tokyo to the 450-foot skyscraper Kingda Ka in New Jersey. The last two coasters were designed by Arrow and Morgan.

Below is the complete Top 10 Steel Coasters:
*=Coasters that I’ve ridden.

What do you think of this year’s winners? Leave a comment below.