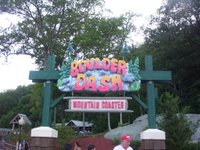 The hype for this ride was huge. Almost too huge. But after three rides on this baby I was able to form an opinion. While I’m not the biggest wooden coaster fan, I am a huge fan of terrain coasters (and mountains for that matter). So, I was itching to get up to Connecticut and check this coaster out. While overall it didn’t disappoint, it was a bit rougher than I expected. Also, I’m glad I rode it several times because I wasn’t completely blown away on my first ride. My ride in the last seat of the last car was very rough. I was jolted so violently at one point that the lap bar came down another notch. It was relentless and thrilling, but as others have pointed out you can get a different ride depending on where you sit and the time of the day.

The climb up the lift is great as you’re immersed into green foliage and exposed rock. Kudos to Lake Compounce for not clear cutting the mountain when they built Boulder Dash. The drop is a fast, swooping drop reminiscent of almost every B&M invert or floorless coaster. I would’ve preferred a more intimidating and steeper straight drop, but it was still fun. From there on, the ride is nothing but speed and airtime as you charge back up the mountain on a pretty long trip out to the turnaround by the lake. Boulder Dash offers an excellent ride. It’s relentless 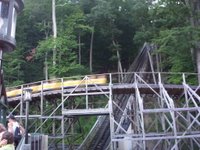 and it feels about as fast as a woodie should be able to go even if it isn’t the wooden coaster speed record holder. My favorite part by far is the turn around at the lake. It’s sick! And along with some intense g-forces, the speed just seems to increase that much more. It’s almost like you hit the launch magnets from Volcano. Awesome!

I was at the park on a Wednesday and the wait was never longer than 15 minutes. Also, the ride operator had some personality and tried to get riders fired up. Both were positives. So why not a 10? It just wasn’t there for me. The rough rides and the fact that I had to deliberate between a 9 and a 10 are enough. A 10 should grab you and tell you “I’m a 10!”. There should be no question. It did however, climb my top ten defeating perennial favorites like Hulk and Volcano.

At the time of this writing (Summer 2005), it sits at number 5 as my highest ranked woodie ever. Boulder Dash was great and it was a coaster that I’m glad I traveled seven hours for. Get to ‘The Lake‘ and you won’t regret it. Just know that you’re about to ride a beastFinal Rating – 9.5 (Excellent-Approaching Superior)

What’s Your Take?
Have you ridden Boulder Dash at Lake Compounce? Leave a comment below.