El Toro: A Landmark Roller Coaster Is Born
Ladies and gentlemen, the future is here! Riding El Toro is something any coaster enthusiast, heck, any person 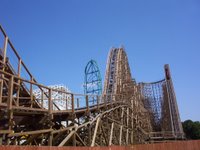 with a pulse should do. Especially if you think you know what wooden coasters have to offer. El Toro is going to turn your world upside down. The Plaza Del Carnival section is appropriately themed with a Spanish flare. The look and feel is definitely a step above cheesy or contrived. Right down to the sandy desert-like landscaping with chill pepper plants. Even the smell of the food reminded me more of restaurants in Mexico than Taco Bell. The Viper’s old southwestern station fit into the area perfectly. The trains are themed somewhat like mine train cars and have a very comfortable, next generation look and feel. Loading the trains is a bit slow, but the trains are longer than normal holding 36 riders compared to 24 on Thunderhead and 28 on The Voyage.

Intamin’s Prefabricated Wooden Coaster Delivers
The ride starts with a quick climb up a relatively quiet lift hill. Already the ride has been uncharacteristically wooden. As I crested the top I looked 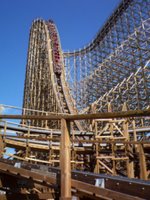 over and down at Medusa. The height of El Toro gets forgotten, just because it’s not a record breaker. You quickly turn around and drop down the 176 feet of steep track at 76 degrees. This is easily the best first drop of any wooden coaster I’ve ridden, it provides some air and you really feel the steepness. You cross under some track and rise into the first airtime hill. You’re ejected north to the sky, even though you’ve been stapled in by the ride ops. The next hill offers more of the same blissful airtime. The swooping banked turn is next. It’s great especially if you’re seated on the right side of the train. Thanks to the prefabricated track, the ride is glass smooth so far and it’s even more apparent during the swooping turn. If you closed your eyes you’d think you were on a B&M hyper or some other type of steel coaster. After the turn, there’s another fun drop and a smaller, shorter drop that offers the least air on the ride.

Extreme Ejector Air & A Twisting Finale
Next the track quickly banks to the left which sets up coaster AIRTIME BLISS. The track finishes the turn then rises up and you drop straight into the twisted finale. This innocent looking hill has the sickest airtime on the planet! It’s so forceful that you feel if the restraints failed you’d end up being flung into the tiger exhibit over in the Golden Kingdom. After that El Toro finishes strong with a twisting section close to the ground reminiscent of another bull, Raging Bull at Six Flags Great America. This twisting section is much more satisfying. You finish the twisted finale and eventually reach the breaks. All the riders I rode with returned with the euphoric feeling of heroin. People aren’t used to riding something so thrilling and comfortable. I had 3 rides on El Toro, but I could’ve re-rode 10 or 20 times if I could’ve. You’re not shaken, slammed, bruised, beat up, beat down, jolted, or smacked around the entire ride. Yet it’s thrilling from the beginning to the end.

There’s nothing that I would particularly change with El Toro (hence the perfect score). But I would’ve like to have seen a tunnel or two. It would only add to the ride. I’m a sucker for tunnels, terrain coasters, and the like. But let me be clear in stating that El Toro is missing nothing! It doesn’t unseat S:ROS at SFNE as the best coaster on the planet or Kumba as my personal favorite, but it comes pretty darn close. The Voyage and n

ow sits at number 3 on my Top Ten Coasters. This is why I try to save 10’s for rides that really deserve them. El Toro deserves one of my few 10’s and then some. I’m sure GCI and Gravity Group are doing push-ups if they’ve ridden this coaster. Intamin’s on its way to World domination. Final Rating – 10.0 (Superior)

Check out the rest of my rating scale here. Also, check out this great roller coaster video of El Toro. Note the speed of the lift hill and smoothness of the ride. You can really here those riders scream on those airtime-packed hills.

El Toro is rated ‘IN’ for Intense. It’s a 4 out of 5 on my Thrill Scale for of its height and speed.

What’s Your Take?
Questions or comments about El Toro? Leave ’em below.