Mitch Hawker’s Internet Roller Coaster Poll Results
The results for Mitch Hawker’s Roller Coaster Poll have been posted. Information about how Mitch’s poll works can be found here. Basically on the ballot you indicate all of the roller coasters that you’ve ridden and then you rank them. The results are based on which coasters were ranked higher than other coasters by riders who had ridden them both.

The big news for the wooden roller coasters was The Voyage’s debut at number 1. It’s a great ride and deserving of the top spot. To me, it’s no surprise that all three of Intamin’s prefabricated coasters (Balder, El Toro, & Colossos) are in the top ten. After riding El Toro, I have seen the future. It will be interesting to see if El Toro moves up even higher next year. It opened late in the season and that might have had some effect on people getting to ride it. 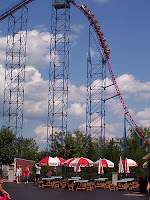 Superman: Ride of Steel at Six Flags New England deservedly took the top spot for the steel coasters. Surprisingly though, the steel coasters were dominated by foreign entries. This contrasts greatly with the Golden Ticket Awards. Amusement Today’s poll had only one non-U.S. coaster in its top ten as Expedition GeForce landed at seventh. On Mitch’s Internet Poll it narrowly missed the top spot.

I’m happy that I don’t see Kingda Ka or Top Thrill Dragster. They made the list, just not the top ten. They’re fun, record breaking thrill rides, but shouldn’t be placed among the best roller coasters in the world in my opinion. It’s good to see my favorite designers Bolliger & Mabillard with six out of the ten coasters. I’ve ridden three of the four U.S. entries and none of the international coasters. It looks like I’ve got some traveling to do.

What do you think of Mitch’s Internet Poll? Do you think the Golden Ticket Awards or Mitch’s Poll are a better indicator of the best coasters in the world? Leave a comment below.