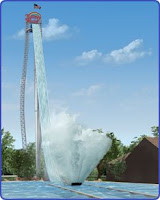 Holiday World has been teasing their new attraction both on their blog, The Holiblog, and through Twitter messages sent to their 300 plus followers. Hints including ‘world’s tallest’ had the coaster community abuzz. I even signed up for the park’s Twitter messages. With my phone buzzing at random times throughout the day, I felt like Batman trying to figure out the Riddler’s cryptic clues.

As the hints suggested, Pilgrims Plunge is a new twist on a classic ride. It will feature an elevator that will lift the five 10 passenger boats to a height of 135 feet above the park. After a brief pause the boat will plunge a world-record setting drop of 131 feet at 45-degrees. The ride will generate an enormous wave of water that will be 45 feet high and 90 feet wide.

Pilgrims Plunge – Great Addition to a Strong Lineup
Pilgrims Plunge joins the park’s killer trio of wooden coasters that includes the top-rated Voyage, the underrated Legend, and the enthusiasts favorite Raven. While this new ride is not a roller coaster (like many suspected) I think it fits into the park much better than a lot of the random guesses that were floating around the Web. I wasn’t too far off with my guess of a water coaster. Read more about the Pilgrims Plunge on Holiday World’s site. Also, check out these off-ride & POV videos:

New HoliWatch Service for 2009
For a smaller park in rural Indiana, Holiday World sure is embracing technology. Also announced today was the new HoliWatch service. According to the park’s Twitter message:

“It uses RFID technology and is a child (or adult locator), plus message and info system.”

The water proof, wristband-style devices will use radio frequencies and will help families stay connected. The HoliWatches will be free to park guests in 2009.

What do you think about Holiday World’s new Pilgrims Plunge & HoliWatch service? Leave a comment below.
Coaster Critic is your source for opinionated roller coaster reviews and theme park reviews.
As Seen In