The Coaster Critic Faces the Most Extreme Coaster on the Planet
The main attraction of my first ever West coast coaster trip was the newly redesigned and much hyped X2. I was lucky enough to catch the ride when the 2 hour wait was only about 50 minutes. It was about 4 in the afternoon on a Thursday in mid-August.

X2’s theming was better than expected. Six Flags took the ‘extreme’ theme and ran with it. There were huge flat panel televisions in the never ending queue showing homemade and professional stunts gone wrong. Many were from Break.com and they were an excellent way to pass to the time in the queue. There were the occasional wipe outs that had everyone in the queue cringing or laughing. In the station, there was a recurring weird, ethereal loop of a woman whispering ‘X2’ and a man saying ‘Is everybody in?.’ I guess I get what they were going for, but the poor ride ops must be ready to jump off of the Magic Mountain tower by the end of the season.

X2: The Ride Experience
I’m not even going to try to do my usual play-by-play and take

you through the elements. I’ll just recount what I can remember. The 20 foot wide trains look really cool and elicit lots of ‘oohs’ and ‘ahhs’ from people in the queues. The trains have eight rows that are four across with two riders on either side of the track. The restraints were pretty comfortable and felt secure. I sat in the third row from the front next to a middle aged woman who was also a first-time rider. I was in the outside-right seat. We exited the station to the applause of the riders and the seats begin to rock and rotate gently on their own. 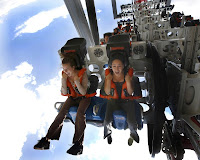 Be You’ and then switched to Metallica’s ‘Enter Sandman’, and finally a Rage Against the Machine song. It was like a broken radio and I didn’t really get the point. We were reclined back in our seats looking out onto the park as we climbed the lift. At the top, we dropped a little and then we rotated over and flew down the 215′ drop face-down. After that insane experience, X2 rotated us every which way though the train actually only inverted twice. At times your facing the front of the train with the track above the center of the train and at times you’re facing the backwards with the train over the track. While you’re facing backwards, the new fire effect cooks you as you pass by the flames. I’m assuming that I didn’t see the lightning or fog effects because they are saved for night rides, but I’m not sure.

The Roughness & The Aftermath 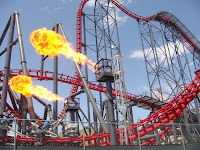 At at least two points (I’m not sure where I was in the layout) you get shaken like a rag doll. These were probably at the lower points where the g-forces and speed was at a maximum. It wasn’t painful, but it was far from enjoyable. But I would imagine it’s got to be at least a little painful for some riders (ie. women). The final inversion (a fly to lie) was fun and a bit disorienting and the train smoothly rides into the the station. The woman next to me looked like she’d just been held at gunpoint. She told me in all seriousness that she had just seen her entire life pass before her eyes on the first drop. She yelled back to a girl (I’m assuming was her daughter) for dragging her on the ride. She swore off X2 as the worse coaster (maybe even experience) of her life. While I wasn’t in her traumatized state, I tried to sympathize a bit but when you’ve ridden over 150 roller coasters it would take Devil’s Flight from Final Destination 3 to really scare you.

A Thrill Ride That’s Not for Everyone
Like the extreme sports and stunts from the videos in the queue, X2 is not for everyone. Because X2 is so unique, thrill riders will love it. Most of the people I saw exiting the ride were still pumped with adrenaline. People like this will be able to overlook the ride’s flaws, but those who are typical, traditional roller coasters fans and expect a smooth ride will be greatly disappointed. The inside seats are supposed to be smoother, but the ride the outside seats gave was ultra rough at times. X2 is hard to rate as there’s really nothing to compare it to. Going down my rating scale I would have to say X2 falls in the ‘8’ category. It’s definitely not a 10 and is slightly too flawed to be a 9.

It can be difficult to separate its uniqueness and the aura around X2 from the actual ride it gives. At the bottom of some of the hills I felt like I was being shaken like I was having a seizure, but at other times the view and perspectives were unparalleled. Final Rating – 8.5 (Great Approaching – Excellent)

What’s Your Take?
Have you ridden X or X2 at Magic Mountain? What did you think? Leave a comment below.