My Insane 11 Hour Blitz of the Los Angeles Theme Parks
Part 1 – Pacific Park at the Santa Monica Pier & Six Flags Magic Mountain
Thanks to all of the readers and those on the various message boards out there for the tips. I landed at LAX at around 10:30 in the morning on Thursday, August the 14th. 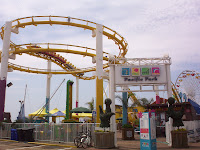 Park I figured I’d start my adventure there. I wasn’t expecting much from the West Coaster, but I had seen the park in so many TV shows and movies and I wanted to see a bit more of Cali. The park was really small and the West coaster was nothing to write home about, but at least the ride op ran us through twice. So with the view of the ocean, two consecutive rides, and the ride credit, I got my $5 worth. 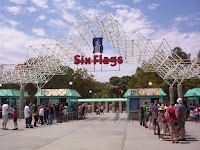 While only diverting from Six Flags Magic Mountain for about 40 minutes, I was back on my way to the park. I got to the park around 1-ish. I knew that lines would be bad so I got a flash pass. Unfortunately, I waited until the night before my trip to buy one and they were sold out of regular flash passes. So I had to get a thrill pass.

My first coaster was Revolution at 1:30 after not being able to stomach X2’s 2 hour wait. Next, I darted to Tatsu (1:40) and bypassed a pretty bad looking line with the flash pass. Then I climbed the hill and headed for Superman The Escape. The cool air inside the ‘Fortress of 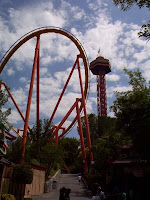 Solitude’-themed station felt great, but after 20 minutes of waiting Superman broke down. I slipped out the wheel chair exit and headed over to Goldrusher (2:30) which was a walk on.

Riddler (2:55) was about a fifteen minute wait even with the flash pass. The station was about as unorganized as I’ve ever seen. I really enjoyed the ride. I put it right there with Chang as the co-kings of the stand-ups. Then I headed over to Colossus (3:10) which was a three train wait. It wasn’t terrible on the spectrum of bad, rough woodies, but it wasn’t that good either. Would’ve helped if they were running both sides, but with the low ridership I can see why they weren’t.

Though I’d ridden Medusa at Six Flags Great Adventure, I figured I’d tackle its clone Scream! (3:30). I blame this surprisingly rough parking lot looper for stealing my cell phone! Ok, so it was my fault for not putting it my cargo pockets with zippers like I had been all day, but the last time I remember having it was right before boarding Scream and with its surprisingly forceful ride it likely dumped the phone out of my pocket on that camelback inversion that really throws you.

Unaware that my phone was missing, or maybe I still had it this point, I 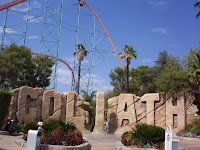 quickly walked to Goliath (3:45 & 3:55). I was looking forward to it all day because I love hyper coasters. The gentle slope of the first drop really disappointed me. There’s a little air on the third hill and the helices are okay. I will say the longest helix that was really low to the ground has blackout potential. All in all, Goliath was good not great.

At 4:00 I had lunch at the Mooseburger Lodge because I had a free buffet that came with the Thrill Pass. It sounded like a great bonus, but the food was sub par and I’m not really used to mounted moose heads serenading me while I eat.

Stay tuned for the conclusion of my California trip including my ride on X2 and night visit to Knott’s Berry Farm. Any questions or comments about my trip? Leave a comment below.