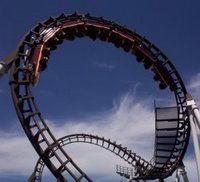 I hate waiting in lines just as much as the next guy. Maybe even more so. When I go to theme parks my time is usually limited and I’ve often got a long drive ahead of me. “Get to the park, ride the coasters, and get out” is usually the game plan.

So, when I found out that Hershey Park was going to open its season with a special Spring Preview and half-price admission, I was there. I’d visited Hershey back in ’02, but the park was really full so my girlfriend and I skipped a few coasters. Also, I wanted to ride the Storm Runner, a new 75 mph rocket coaster that had been getting some great reviews. In the coming weeks I’ll be posting some reviews from my trip to Hershey.

If you ever get a chance to go to Hershey or any park early (March/April) or late (September/October) in the season, I highly recommend it. The lines are shorter, admission is often discounted, and did I mention that the lines are shorter? There are a

few downsides. The weather’s often a bit too cool. And quite often parks will have the less popular attractions closed (typically water rides and flat rides). My trip to Hershey was a short 2 hour drive each way, I had great 70 degree weather, and pretty short waits. They have a great collection of coasters, nice park atmosphere, and I hear the Chocolate World tour ride is great. I’m just not sure why the chocolate was so excited to be eaten. I guess it has a sense of purpose or destiny.