Class of 2008 – Roller Coasters That Debuted This Year
As predicted in my Top 10 New Roller Coasters for 2008, my top pick Ravine Flyer 2 opened to many positive reviews and it landed at 8 on my Top 10. Read my full review. I’m looking forward to seeing how it fairs in Mitch’s ’08 Coaster Poll next month. Canada’s Wonderland’s Behemoth also received a lot of props on the Web and some even hailed it as the best B&M 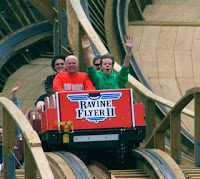 hyper coaster to date. Fahrenheit’s reception was mostly positive, but its opening wasn’t the smoothest including a session where it valleyed back in May.

Also, a couple of family launch coasters opened. I rode both the Pony Express at Knott’s Berry Farm and OCC MotoCoaster at Darien Lake and they were pretty fun. Here’s my review of the MotoCoaster. X2 was reborn, but I can’t really compare it to its former self. Supposedly, it was smoother. The schizophrenic music was more weird and annoying and done much better on Led Zeppelin. The only special effect that I remember was the super hot flame which was okay. Here’s my X2 review. 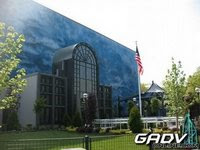 at Great America (Chicago) and Great Adventure (New Jersey) were slammed with bad reviews and comments. Like this 40 comment post where angry readers left reviews that included words like: ‘lame’, ‘terrible’, ‘wack’, and ‘horrible.’ Even though they were based on a run-of-the-mill wild mouse, I thought these coasters had potential. Allegedly, I was wrong. SF New England lost their Dark Knight clone due to planning mishaps. They may have actually dodged a bullet. The Dark Knight coaster that was coming to New England is now being built at Six Flag Mexico.

Theme Park Accidents
Like 2007, we saw another high profile, gruesome theme park accident in June. Last year there was a teen girl whose feet were severed while on a drop ride at Six Flags Kentucky Kingdom. This year, a teen was beheaded by one of Batman: The Ride’s trains. Read the full story including a video of CNN coverage. Since the incident, Six Flags has increased the presence of warning “Do Not Enter” signs around their coasters. Aside from signs and the 6-foot fences there isn’t a whole lot Six Flags can really do with incident like this and another one at Magic Mountain where a man was hit by Ninja. For more, read all of my roller coaster accident posts from this year and years past.

Troubled Economy Strikes Amusement Park Industry
One of the biggest stories of the year was the opening, and premature cl

osing, of the brand new $400 million Hard Rock Park. The park sited insufficient marketing funds and Myrtle Beach guests taking shorter trips. As I’ve said before, I wonder how the park would have done if its first year would have been in a better economy. Read about all things Hard Rock Park including my park and coaster reviews.

Herschend closed Celebration City and canceled Adventure Montain at Dollywood. Cypress Gardens will no longer be a theme park and is selling its theme park rides. And somehow, after talks of being de-listed from the stock exchange, Six Flags faired relatively well according to their latest earnings release. They definitely took noticeable action to combat the down economy with the “everyone pays kids price promotion”
running for much of the summer.

Amusement Industry Continues to Consolidate
PARC Management who also acquired seven former Six Flags parks in 2007, bought Arkansas park Magic Springs, several Family Entertainment Centers and NASCAR Speed Parks. InBev bought American brewing stalwart Anheuser Busch which has major implications for the Busch Entertainment Group which runs the SeaWorld, Busch Gardens, and Discovery Cove parks. Still no word yet on the fate of the parks, but all signs are pointing to the new owners selling off the amusement park arm of the business as InBev likes to stick to their core competencies. I for one think beer and theme parks co-exist beautifully. Well, not really, I just don’t want anything to happen to my favorite park chain.

Suddenly Dubai, a city that’s literally rising from the desert overnight, is the place to be for the amusement industry. Everyone’s looking to or already has planted their flags there. A large Busch multi-park on an island shaped like Shamu was just the beginning. There will be a Universal Studios Dubai, a Six Flags Dubailand (2011), Legoland Dubailand (2011), a Marvel Theme Park (2012), and a Dreamworks Dubailand (2012). I’m sure there are more as well. I might have to find myself a plane ticket to the United Arab Emirates in 5 years or so.

In Memorium
This year, we said goodbye to a few roller coasters. One of the most missed will be Dorney’s Schwarzkopf designed looper the Laser. I never heard any official word on why it was sold, but I would assume low ridership or to make room for something new. Super Saturator’s gone from Carowinds to make room for the Carolina Cobra. Thankfully, Hypersonic XLC was removed from my old home park, Kings Dominion. I can’t say that I’m sad to see it go. Read my Hypersonic XLC review to see why. Six Flags America is selling Two Face after many breakdowns leaving riders stranded. A landmark coaster in the UK was recently removed from Alton Towers. The Corkscrew, was one of the first double-looping coasters in Europe.

What’s Your Take on 2008?
Did I miss anything? What do you think was the biggest story of the year? Did you have a favorite ride or really memorable trip to a park? Leave a comment below.