e by the same designers that built a masterpiece in another Superman: Ride of Steel located at Six Flags New England is baffling to me. They’re the same type of coaster and have the same name, but the similarities end there.

Up, Up, and Away
The experience starts with minimal theming in the queue and station. Where’s the Superman movie theme like in the New England version? The rides ops were indifferent and did nothing to further rile up the excited riders. Intamin’s seats aren’t as wide open as B&M’s, but the back seat of each car did appear to be raised slightly in a stadium seating fashion. I sat in the last car on all of my rides. After a long climb, you’re treated with the 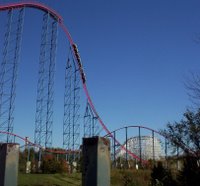 highlight of the ride. You drop down a great 200′ hill next to a green pond. There’s no telling if it’s green by design, if it’s some form of toxic waste, or if it’s just algae. It should be dubbed Kryptonite Creek, because from there on the ride’s less than ‘super’.

The Ho-Hum Hyper Coaster
The banked turn along the ground is actually pretty fun, but the second hill is weak and offers NO airtime. The first helix is fast, but nothing special. The third hill, a short drop into the second helix offers a good pop of air. The second helix offers more of the same. Then you enter the finale. The bunny hills are adequate and one of them has the camera. Then you hit

the brakes. For a hyper coaster, this S:ROS is subpar, if I were comparing it to others it would get a 4 or 5. As a roller coaster, it’s still good. There’s nothing offensive about it, it just scratches the surface of what a hyper coaster can be. Did I mention it wasn’t as good as the SFNE version? Final Rating – 7.0 (Good)